The Dual Stage Filter Device protects the Hot Runner system and mold by avoiding clogging and/or damage caused by metal pieces accidentally introduced to the injection molding machine.
The device is mounted between the extruder barrel and the Molding Machine nozzle. Its unique design allows for two separate melt pathways: one path during injection, where the melt is filtered in two stages and homogenized through a series of decreasing-in-size grooves and openings; and via a separate path during decompression.

Decompression occurs with virtually “zero” pressure drop, allowing for a faster and easier decompression cycle. In addition, during decompression, filtered debris will be bypassed and remain trapped and undisturbed, as the melt follows a separate pathway. There are no springs or components to “stick” or clog up and the filter can routinely be cleaned up, if needed, by simply removing the adapter and purging. 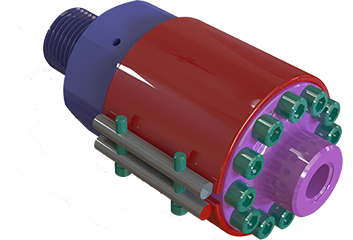 Hot Runner Systems made in the U.S.A.

MDi is a world-leading American manufacturer of Hot Runner systems and components with the capability to develop custom and innovative solutions for plastics Injection Molding. Established in 1984, MDi continues to offer experience in the design and manufacturing of complete, internally heated and balanced precision Hot Runner systems, Valve Gate systems, Sprue Bushings, Molding Machine nozzles, Filters, and MDi’s unique system products and controls. All of our components are in-house designed and manufactured in our facility at St. Charles, IL, with a focus on quality and reliability.

If you have any questions about our products you are welcome to contact us to further assist you.